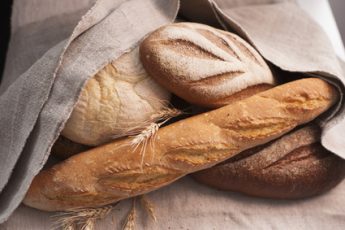 Both France and Italy have a great heritage of breadmaking, but both countries make remarkably different types of bread.

You might wonder how this is possible. I mean. It is bread, right? But when you get into the down and dirty, both types are completely different: Both made in a variety of ways, with different ingredients, and the end product is utterly dissimilar.

Read on to get into the differences between Italian bread vs French bread. First off, let’s learn about the different types of bread you can expect to find from each country.

When you think French bread, the stereotypical bread that comes to mind is the baguette. It is as French as berets and running away. However, France loves its bread and produced loads of other recognisable pieces of bread, including:

Light, sweet and very floaty and open, brioche is in the same family as other pastry items, like croissants and pains au chocolat, and it is made with eggs and butter, leading to the texture and flavour we all love.

A sourdough loaf that is flat and round, and traditionally made with a mix of white wheat and rye. The name translates to ‘country bread,’ because that is where the recipe originally came.

The classic. Baguettes range in length from short, sub sandwich length loaves, all the way to meter long monstrosities. An interesting fact that most don’t know about baguettes is that their ingredients list is written into French law, exactly dictating what you can put into your baguette recipe and how you cook it.

Longer and thinner than a baguette, it is evident why this translates to string bread. Covered with sesame seeds or cheese, Ficelle is easy to munch on without anything else added.

A more Italian style bread, this is associated with Provence, probably, because it is right on the border between the two countries.  Served in a more Italian style, you paired Fougasse with olives or olive oil, herbs, anchovies or tomatoes.

Italy is a hugely diverse country, with multiple provinces that spent hundreds of years feuding with each other and developing their own cultures, cuisines, and yes, loaves of bread, during this time. So it is no surprise that Italy has a bread heritage that is enormous and stretches back so far. A few of the more traditional bread from Italy include:

It means ‘white pizza’, and it is a pizza style bread dough that is eaten on its own, whether topped with olive oil, salt or herbs and sometimes made into sandwiches.

The Sicilian loaf is a loaf of bread that our American readers would probably be familiar with if they’ve ever eaten an ‘Italian loaf.’ Yep. It is sesame bread, and its delicate, fluffy taste is loved all over the world.

We have all had ciabatta sandwiches. Well, this is where ciabatta originates. It is made similarly to pizza dough, just with a little less oil that results in a slightly denser, tougher loaf.

A thick, crusted loaf with tomato sauces baked into the top layer as it cooked, Foccacia al Pomodoro is one of the unique styles of Italian bread but found in a remarkable amount of places.

Hard baked from semolina flour; Pane di Matera is famous for two reasons. One, the intensely yellow colour of the finished product, and the fact that it will stay fresh for a week or even longer without refrigeration.

The Difference Between Italian and French bread

After looking down our list, you’ve probably started to pick up on the differences between French and Italian loaves of bread already, but just in case, here is a handy list of the differences.

French bread is almost exclusively hard and crusty on the outside, with a light and soft middle. Italian bread, on the other hand, tends to be denser and a lot chewier, but can still have a hard crust.

In general, French bread is sweeter, and France has a much larger habit of having their bread with sweet accompaniments, like jam, cream and chocolate. Italy, on the other hand, has a more smoky, savoury flavour, and their bread tends to be excellent accompaniments to hearty, filling foods.

We just mentioned the smoky flavour of Italian bread. That is because most traditional Italian bread cooked in a flat stone oven. French bread, on the other hand, has no such qualms and can be cooked in almost anything.

French bread traditionally comes with the starters, because of its lightness and sweeter texture. Italian bread, on the other hand, is more likely to go with the main, to help you mop up all the sauces and leftovers.

Hopefully, now you understand the differences of Italian bread vs French bread. If you’ve got any more questions, or you think we missed anything out, then be sure to let us know in the comments!